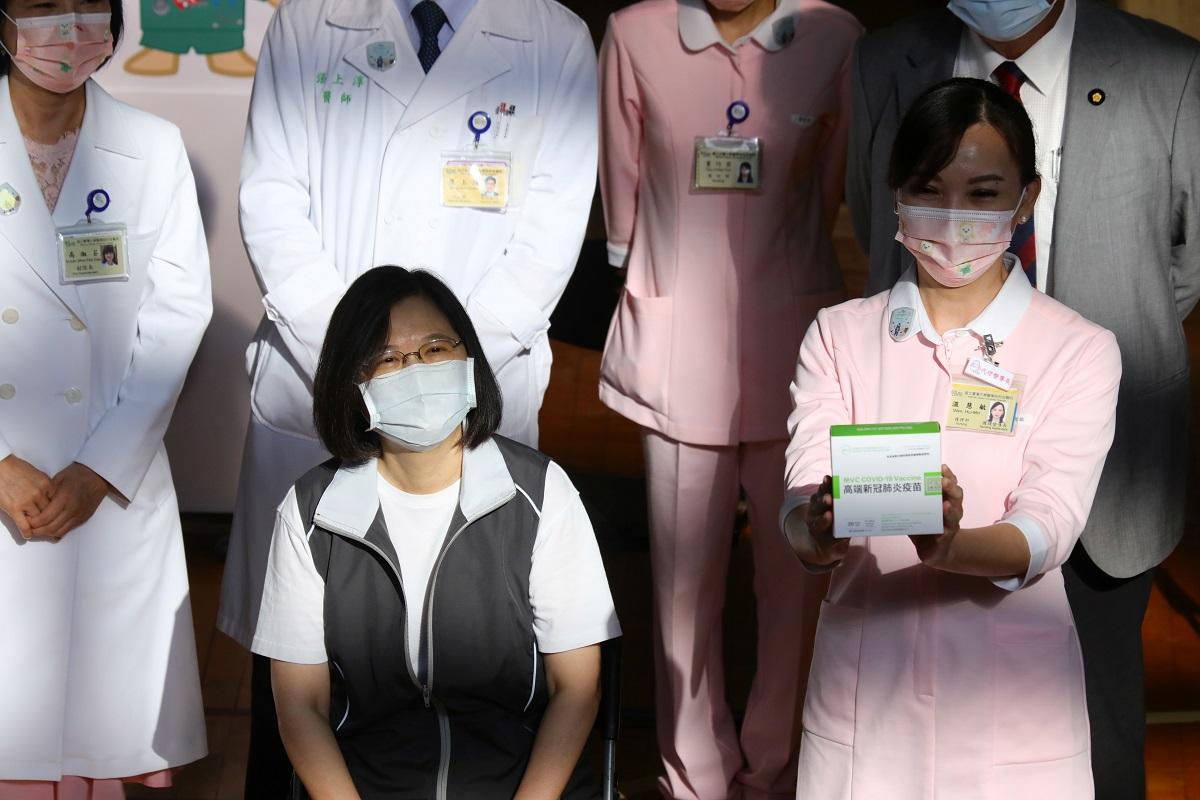 TAIPEI- President Tsai Ing-wen got vaccinated with Taiwan’s first domestically developed COVID-19 vaccine on Monday, giving her personal stamp of approval as the island begins rolling out the shot whose approval critics say has been rushed.

The health ministry last month approved the emergency use of Medigen Vaccine Biologics Corp’s COVID-19 vaccine, part of a broader plan for inoculation self-sufficiency as delays in vaccine deliveries from global drug companies have affected Taiwan and many other countries.

Tsai, who had held off using vaccines from Moderna Inc or AstraZeneca Plc, the current mainstay of Taiwan’s vaccination program, received her Medigen shot at a hospital in central Taipei, demonstrating her confidence in the safety of the vaccine.

Tsai chatted to medical workers as they prepared her shot, the whole process being broadcast live on her Facebook page, and gave a short response of “no” to a shouted question from reporters about whether she was nervous.

More than 700,000 people have signed up so far to receive the Medigen vaccine, which requires a second shot 28 days after the first one.

The government says the initial experience of the pandemic last year, when basic supplies such as face masks were in short supply, made it realize they had to be able to rely on themselves for critical materials.

Medigen, whose Chinese name literally means “high-end,” rejects claims its vaccine is either unsafe or that it has been sent to market with undue haste, saying it is effective and well tested.

“We have done so many experiments, everyone has seen how safe our vaccine is. There are so few side effects, almost no fever and so on. So I think everyone can rest assured,” Medigen’s Chief Executive Officer Charles Chen told Reuters.

The recombinant protein vaccine has been developed in collaboration with the National Institutes of Health in the United States, and the government has ordered an initial 5 million doses. It says nobody will be forced to get it.

The vaccine has yet to finish clinical trials and no efficacy data is available, but the government says studies so far have shown that antibodies created by the shot have been “no worse than” those created by AstraZeneca’s vaccine.

Taiwan’s main opposition party, the Kuomintang, or KMT, has mounted a fierce campaign against the shot, with one of its former vice chairmen, Hau Lung-bin, filing a lawsuit to invalidate Medigen’s authorization, though a court rejected that last week.

The party says it supports domestic vaccines, but that Medigen’s approval has been rushed.

“There is no need for the lives and health of the Taiwanese people to serve as white rats in a laboratory,” Ho Chih-yung, deputy head of the KMT’s international department, told Reuters.

Around 40% of Taiwan’s 23.5 million people have received at least one shot of either of the two-dose AstraZeneca or Moderna vaccines, though fewer than 5% are fully vaccinated.

However, unlike some other parts of Asia, Taiwan faces no huge pressure to accelerate its vaccination drive, as it is recording only a handful of domestic infections a day.

Taiwan has received more than 10 million vaccine doses to date, and in July ordered a further 36 million doses of Moderna’s. — Reuters