LOON, Bohol – The Nuestra Señora de la Luz (Our Lady of Light Church) or the Loon Church in this historic town has reopened eight years after a strong earthquake hit Bohol province on October 15,  2013. 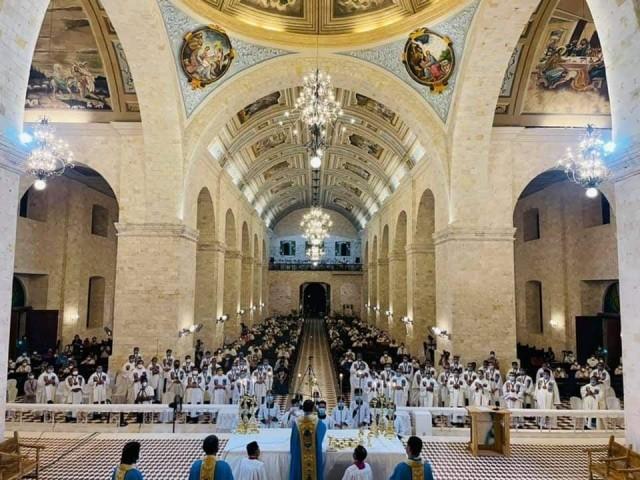 Tagbilaran Bishop Alberto Uy officiates the liturgical dedication and Holy Mass at the Nuestra Señora de la Luz (Our Lady of Light Church) or Loon Church after it was restored and turned over to the Diocese of Tagbilaran. Photo from Bishop Alberto Uy

It was officially reopened on Tuesday, the eve of the feast of Loon, after the  National Museum of the Philippines (NMP) turned-over the church and complex to its legal owner, the Diocese of Tagbilaran.

Centuries-old churches in the province were  heavily damaged during the 7.2-magnitude quake but the Loon church was one of the two heritage churches — the other one is the Holy Cross Parish Church or Maribojoc Church — that were completely reduced to rubble and brought Bohol to its knees.

Relampagos said seeing the restored church made him emotional, especially remembering how it was reduced to ruins after the strong earthquake vis-à-vis its current state.

“I am happy and immensely thankful to the Lord that after nearly eight years, the prayers of our people, especially of the Loonanons, of seeing the church standing again has finally been fulfilled,” he said.

Considered as the biggest church in Bohol, Chatto said,”I never imagine that the restoration will be this beautiful.”

The turn-over was followed by unveiling of the NHCP marker, a liturgical dedication, and mass officiated by Bishop Uy.

“We raise up once again and build back better this temple of living God. This church shall magnify Mary and her Lord. And all this is the work of God. We, who love God love Mary, His handiwork,” said Uy.

Since the attendees of the event was limited due to COVID-19, people can be seen outside the gate praying and holding up lit candles.

The image of the Our Lady of Light left unscathed during the earthquake. The faithful kept their faith and remained hopeful that the church would be restored to its former glory.

One of them was Ramela Palma, 43, who became emotional upon seeing the restored church.

“We are very excited that our church is back. This is the day that the Lord has made. The Lady illuminates her light to us,” she said while she lit candle outside the church.

Prof. Grace Ramada, Ph.D. said that the turnover ceremony and liturgical dedication was the most important event that happened in her hometown after the 2013 earthquake.

“Yes, the structure is entirely the same as the original but the faith of the people is doubled and is more fueled with much hope especially that we are experiencing  this pandemic,” she said.

The Loon Church was built by the Recollects in 1853 and structurally is considered as the most beautiful of the 19th century churches in Bohol.

It was designed by Domingo Escondrillas, a government employee and is made of finely cut coral stones.

The convent built at the same time as the church was later converted to a school. The 7.2 magnitude earthquake on October 15, 2013 reduced the Church of Our Lady of Light to rubble.

In view of architectural beauty and its high significance to the culture and history of the Filipino nation, the Our Lady of Light was declared as a National Cultural Treasure by the National Museum in December 2010. — BAP, GMA News