Signal No. 2 remains over 5 Mindanao areas as Crising maintains strength 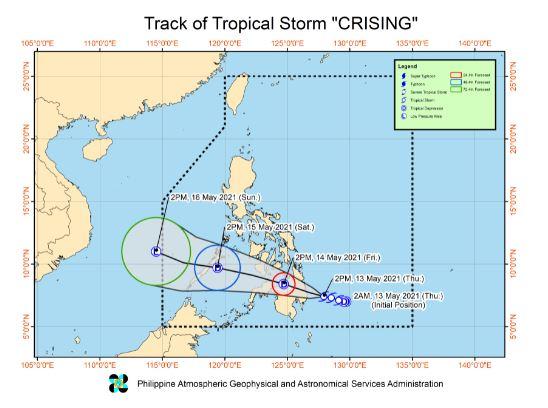 Tropical Cyclone Wind Signal (TWCS) No. 2 remained over five areas in Mindanao as tropical storm Crising maintained its strength and moved closer to the Davao Oriental-Surigao del Sur area, according to PAGASA.

According to its 5 p.m. severe weather bulletin, the following areas under TCWS No. 2 will experience gale-force winds:

PAGASA said the affected areas will experience strong breeze to near gale conditions.

At 4 p.m., the center of Crising was estimated at 150 kilometers southeast of Hinatuan, Surigao del Sur with maximum sustained winds of 65 kilometers per hour near the center and gustiness of up to 80 kph.

It is moving west-northwestward at 25 kph.

The weather agency maintained that Crising is likely to make landfall over the Davao Oriental-Surigao del Sur area between Thursday night and Friday morning.

It is expected to remain as a tropical storm before landfall and weaken into a tropical depression while traversing the Mindanao landmass.

Meanwhile, moderate to rough seas will be experienced over the eastern seaboard of Mindanao in the next 24 hours.

Mariners with small sea crafts and inexperienced mariners were advised to refrain from sea voyage.

The next severe weather bulletin on Crising will be issued at 8 p.m.

Americans may not get some Christmas treats, White House officials warn