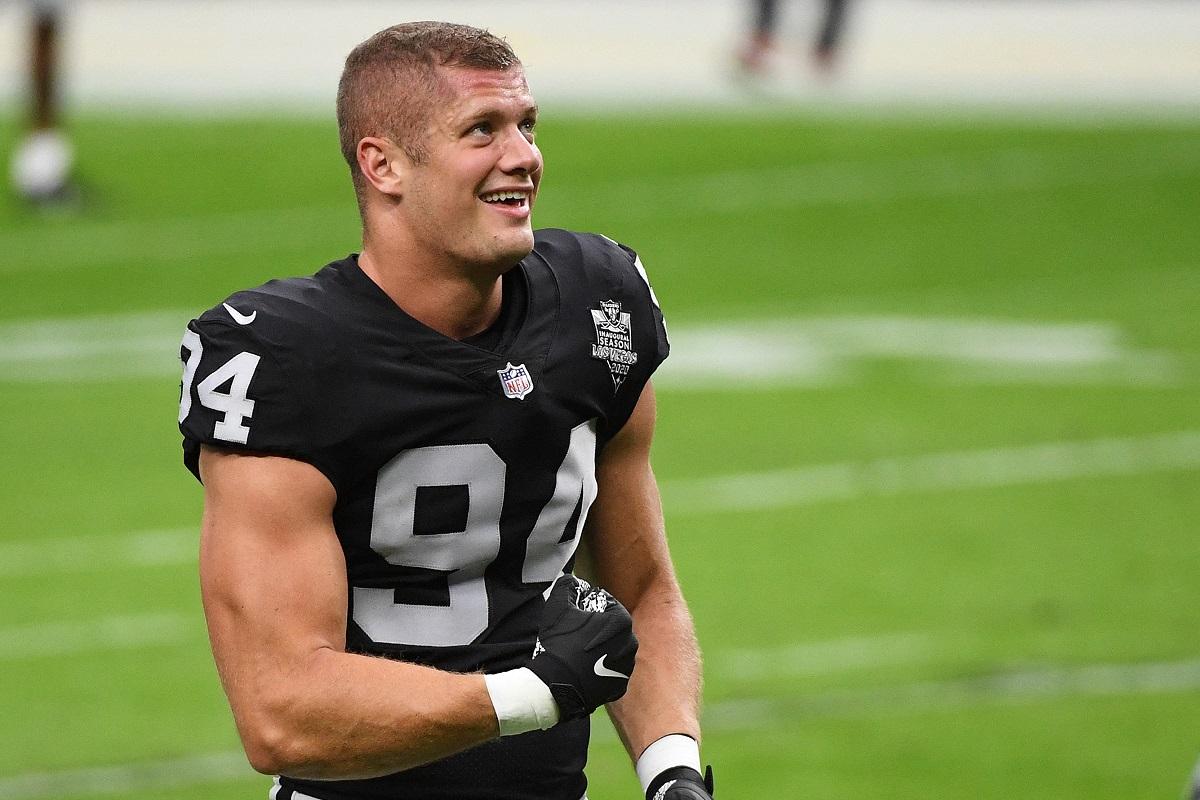 LOS ANGELES — Las Vegas Raiders defensive end Carl Nassib made history on Monday after coming out as the first openly gay active player in the NFL, a move hailed as a watershed moment for America’s most popular sport.

The 28-year-old five-year veteran said in a video posted on Instagram he hoped his example would boost visibility of other gay athletes.

“I just wanted to take a quick moment to say that I’m gay,” Nassib said in the video.

“I’ve been meaning to do this for a while now but finally feel comfortable getting it off my chest. I really have the best life, the best family, friends and job a guy can ask for.

“I’m a pretty private person, so I hope you guys know that I’m not doing this for attention. I just think that representation and visibility are so important.

“I actually hope that one day, videos like this and the whole coming out process are not necessary, but until then I will do my best and my part to cultivate a culture that’s accepting and compassionate.”

Nassib added that he was donating $100,000 to the Trevor Project, a non-profit group which works to prevent suicide among LGBTQ youth in the United States.

In a written post which accompanied the statement, Nassib said he had “agonized over this moment for the last 15 years.”

He said support from family, friends, coaches and fellow players encouraged him to come out.

“I would not have been able to do this without them,” he said.

The NFL family is proud of you, Carl. ?? pic.twitter.com/HXbcBuLg2X

Nassib is the first player on an active roster to come out as gay in the NFL.

Several players have come out after leaving the league, the most popular professional sport in the United States.

In 2014, college player Michael Sam was drafted by the St. Louis Rams after coming out as gay but was released after playing in a handful of pre-season games and never played a regular season game in the league.

Rights groups said Nassib’s decision would have a significant impact in raising the visibility of LGBTQ athletes.

Sarah Kate Ellis, the chief executive of GLAAD, said Nassib’s announcement “sends a strong message to so many LGBTQ people, especially youth, that they too can one day grow up to be and succeed as a professional athlete.”

The Raiders meanwhile praised Nassib, posting his Instagram statement with the message: “Proud of you Carl.”

Proud of you, Carl ???? pic.twitter.com/R9aJxYFefW

“It’s 2021,” Raiders team owner Mark Davis told ESPN. “All the more power to Carl. It doesn’t change my opinion of him as a person or as a Raider.”

Raiders head coach Jon Gruden added: “I learned a long time ago what makes a man different is what makes him great.”

“We share his hope that someday soon statements like his will no longer be newsworthy as we march toward full equality for the LGBTQ+ community,” he added.

Wade Davis II, one of a handful of former NFL players who came out after leaving the league, was among the first to congratulate Nassib.

“Bravo Carl Nassib—thank you for inviting us in,” Davis wrote on Twitter.

Former NFL quarterback Warren Moon said he was “really proud” of Nassib, explaining that he had “played with several guys who never were comfortable enough to go public…I hope this lets other athletes know, its OK to say who you are.”

“The ability to live an authentic life is so important. Sending love and support,” wrote US tennis legend Billie Jean King. “Representation and visibility matter!”

Former basketball player Jason Collins, who became only the second openly gay athlete in a major professional sports league in the United States when he joined the Brooklyn Nets in 2014, said he was “very proud” and “incredibly happy for [Nassib].”

Support also came from outside the world of sport, with Star Trek actor George Takei saying he knew “what it’s like to have the eyes of the world on you when you do finally speak your truth.”

“It took me until I was in my late 60s to come out,” he wrote. “Such is the power of the closet… Bravo, Carl Nassib. You have tackled a great deal today.” — AFP