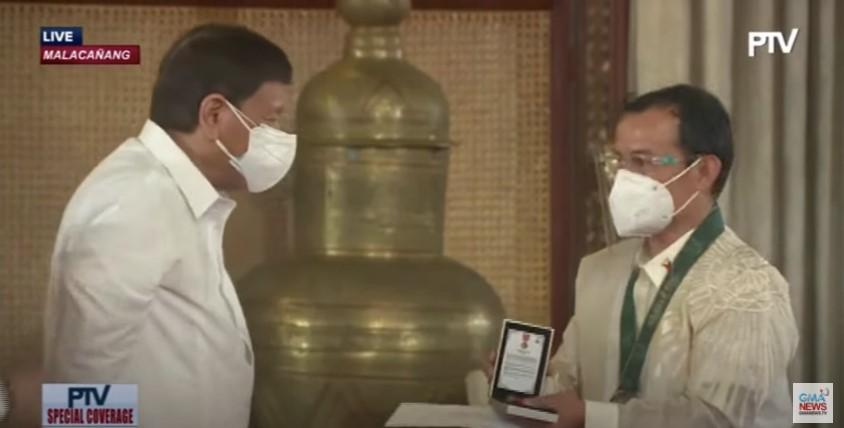 The Tokyo 2020 Olympic medalists on Monday received honors and rewards from the government in Malacañang Palace following their successful stint in Japan.

But among their ranks was another Olympic hero who also received his due, even if it comes later than expected.

Mansueto ‘Onyok’ Velasco, the Philippines’ silver medalist in boxing in the 1996 Atlanta Olympics, was awarded the Order of Lapu-Lapu, rank of Kamagi, and P500,000 from the Office of the President for his achievement in the Summer Games 25 years ago.

In the midst of rewards and incentives promised to the current crop of Olympic medalists while the games were ongoing, Velasco had revealed that some of the pledges promised to him during his time were not fulfilled.

The Palace had called it ‘kapabayaan’ or negligence that Velaso was unable to receive incentives by the governement. Other private companies reached out with pledges for Velasco as well, including cash incentives and a roasted chicken store.

On Monday, Hidilyn Diaz, the Philippines’ first-ever Olympic gold medalist, was awarded the Presidential Medal of Merit, P10 million reward as mandated by Republic Act 10699, an additional P5 million for breaking the Olympic record, a P3 million cash incentive from the Office of the President, and a certificate of turnover of a housing unit from the National Housing Authority.

Olympic medalists Nesthy Petecio, Carlo Paalam, and Eumir Marcial, meanwhile, received the Order of Lapu-Lapu, rank of Kamagi and individual certificates of turnover for housing units from the NHA.

The other athletes who competed in the Tokyo Games received P200,00 and a Presidential Citation. Olympians Jayson Valdez (shooting) and Elreen Ando (weightlifting) received their incentives in person.

“I congratulate you once again for bringing pride and honor and uplifting the spirit of Filipinos amidst the COVID-19 pandemic. Your hard work, dedication, and sportsmanship, even amidst the challenges in your training and competitions prior to the Olympics are truly inspiring,” Duterte said.

“I am confident that you will get better in securing more victories in the future,” he added.

The Philippines had its most successful stint in the Summer Games after it bagged four medals in the recently-concluded Tokyo Olympics.