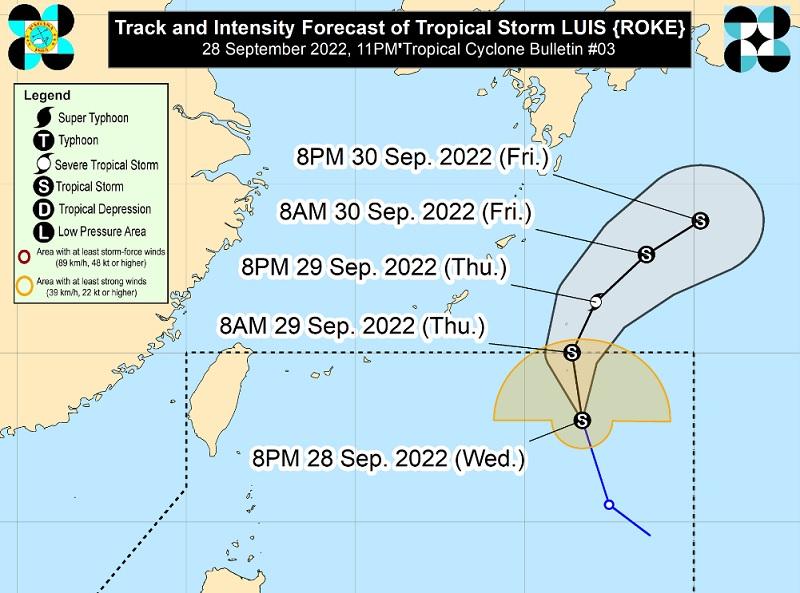 Tropical Storm Luis further intensifies while approaching the northern limit of the Philippine Area of Responsibility (PAR), according to the Tropical Cyclone Bulletin posted by PAGASA early Thursday morning.

The center of Tropical Storm Luis was estimated at 1,090 kilometers east northeast of extreme Northern Luzon packing maximum sustained winds of 75 kilometers per hour near the center, gustiness of up to 90 km/h, and central pressure of 996 hPa.

Luis is moving northward at the speed of 20 km/h with strong winds extend outwards up to 290 km from the center.

“Tropical Storm Luis is unlikely to directly affect the weather condition in the country within the forecast period,” PAGASA said.

It is the Low Pressure Area (LPA) located at 335 km east of Guiuan, Eastern Samar that is expected to bring cloudy skies with scattered rain showers and thunderstorms to Eastern Visayas, Caraga, and Bohol with possible flash floods or landslides due to moderate to at times heavy rains.

Metro Manila and the rest of the country will have partly cloudy to cloudy skies with isolated rain showers or thunderstorms due to localized thunderstorms with possible flash floods or landslides during severe thunderstorms.

“The tropical storm remains unlikely to bring rough seas over the coastal waters of the country which may result to risky conditions to mariners,” the weather bureau also reported.

“On the forecast track, Luis will exit the Philippine Area of Responsibility (PAR) this morning. Further intensification is likely while moving over the sea east of the Ryukyu Islands, with Luis reaching severe tropical storm category within 24 hours,” the agency added. — BAP, GMA News