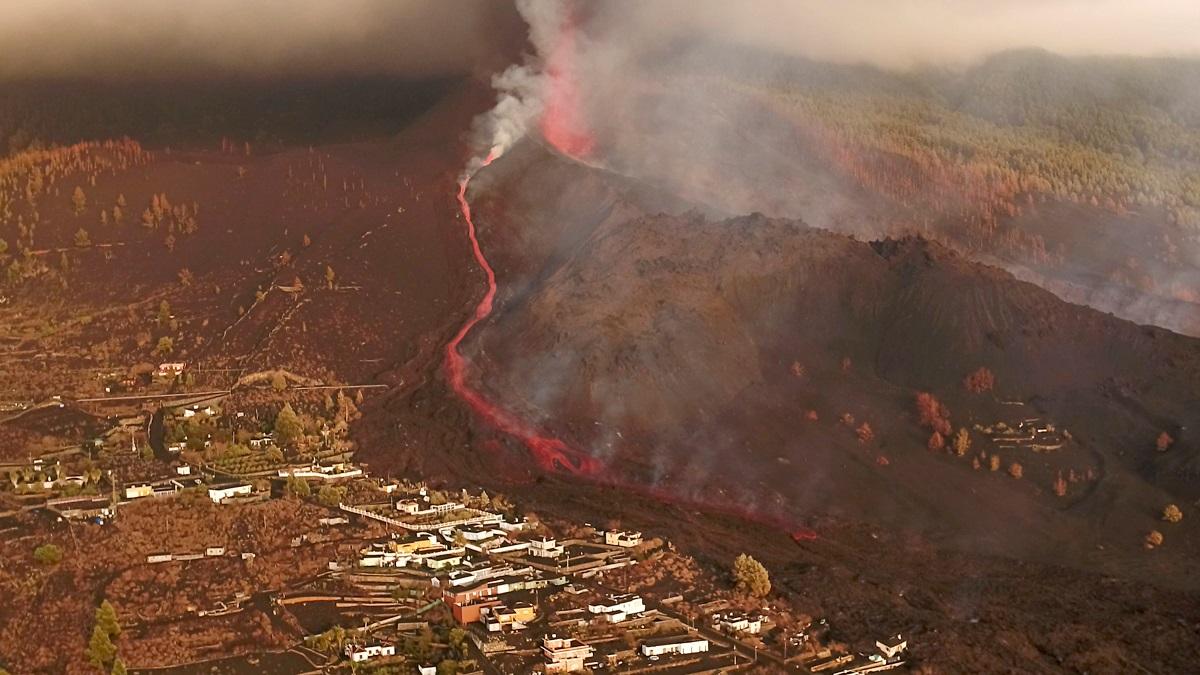 LA PALMA, Canary Islands, Spain — The airport on the Spanish island of La Palma reopened on Sunday but flights remained canceled as the volcano continued to spew lava and emit ash clouds over the surrounding area a week after it erupted.

Reuters drone footage showed a rapid river of red hot lava flowing down the slopes of the crater, passing close to homes, and swathes of land and buildings engulfed by a black mass of slower-moving, older lava.

Spain’s airport operator Aena said the airport had reopened after teams cleared ash off the runway. But Binter, the Canary Island airline saying it will keep flights cancelled today because of the conditions.

“The ash cloud originating from the volcanic eruption makes it necessary to maintain the temporary stoppage of flights to La Palma…The flights scheduled for today have been cancelled,” it said in a statement. “The stoppage will continue until conditions improve and allow flying, guaranteeing safety.”

Spanish media reported all flights would remain cancelled on Sunday.

The Cumbre Vieja volcano, which began erupting last Sunday, entered a new explosive phase on Friday, experts said. The national Geographical and Mining Institute said on Saturday its drones had shown the volcano’s cone had broken.

The eruption has destroyed hundreds of houses and forced the evacuation of nearly 6,000 people since it began on Sept. 19.

“La Palma airport is back in operation. After progress in ash cleaning work, it can now be reopened,” Aena tweeted.

Travelers had been faced with cancelled flights on Saturday, and many had joined long queues at the port in the hope of getting a boat off the island.

On Sunday, ferry operator Fred Olsen Express said it would add an extra round trip between La Palma and Tenerife from Monday until Wednesday.

“Fred Olsen Express will increase connections… to continue meeting the demand for transport generated by the emergency situation caused by the volcanic eruption,” it said in a statement.

Some people evacuated from towns close to the volcano were allowed to return to their homes to collect their belongings, authorities said on Saturday night.

La Palma, with a population of over 83,000, is one of an archipelago making up the Canary Islands.

No fatalities or serious injuries have been reported in the volcano’s eruption, but about 15% of the island’s economically crucial banana crop could be at risk, jeopardizing thousands of jobs. — Reuters