Jolina now a typhoon; Signal No. 3 up in Samar provinces 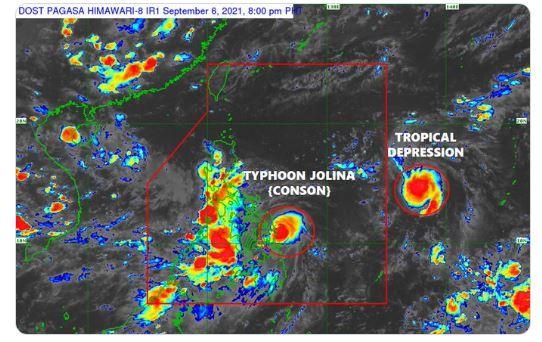 On Twitter, PAGASA announced that the typhoon has made a landfall in the vicinity of Hernani, Eastern Samar at 10 p.m.

It also hoisted Signal No. 3 over southern portions of Eastern Samar and Samar provinces.

At 8:00 PM tonight, #JolinaPH intensified into a typhoon. It is about to make landfall over Hernan-Llorente area in Eastern Samar.

Tropical Cyclone Wind Signal No. 3 is now in effect over the southern portions of Eastern Samar & Samar provinces. pic.twitter.com/ex3OLsOBgX

PAGASA last located Jolina at in at the vicinity of Llorente, Eastern Samar at 10 p.m. while moving west northwestward at 20 kilometers per hour.

The weather disturbance is packing sustained winds of up to 120 kilometers per hour (kph) and gustiness of up to 165 kph.

Specifically, Signal No. 3 was raised over:

Under this storm signal, destructive typhoon-force winds are expected in the affected areas within 18 hours.

Meanwhile, Signal No. 2 was hoisted over:

Under Signal No. 2, damaging gale-force to storm force winds are expected within 24 hours.

Further, the state weather bureau hoisted Signal No. 1 over the following areas:

In an interview over dzBB, PAGASA weather forecaster Aldczar Aurelio said the typhoon will not affect Metro Manila. But the metropolis will experience rains due to thunderstorms.

Jolina was also expected to bring heavy to intense, with at times torrential rain, over Northern Samar, Eastern Samar, Samar, and Sorsogon.

Moderate to heavy rain could meanwhile be expected over the rest of the Visayas and Bicol Region.

PAGASA, likewise, warned small boats that sea voyages are risky at areas under Signal No. 2 and 3.

In Signal No. 1 areas and eastern seaboards of Mindanao, moderate to rough seas will be experienced.—LDF, GMA News