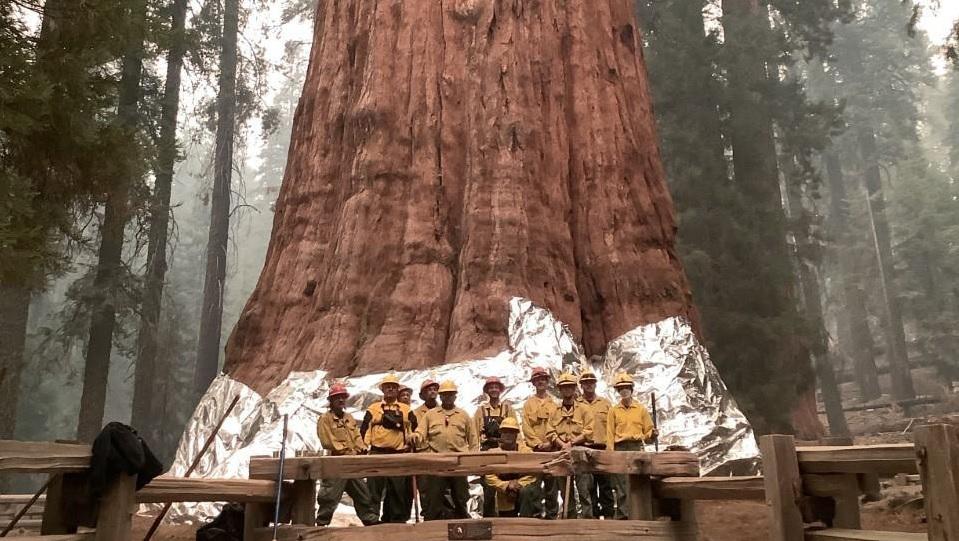 A group of landmark giant sequoias has so far been spared by a blaze sweeping through a California national park, authorities said on Sunday.

The so-called KNP Complex fire, which was ignited by lightning earlier this month, reached the western edge of Sequoia National Park’s Giant Forest, home to a group of ancient sequoia trees dubbed the Four Guardsmen.

But protection measures including wrapping the bases of the huge trees in fire-resistant coverings kept safe “these national treasures,” Sequoia and Kings Canyon National Parks officials wrote early on Sunday in a Facebook post.

The Guardsmen mark the entrance to the Giant Forest, a grove of some 2,000 sequoias.

The General Sherman, the world’s largest tree that towers over the others at 275 feet (83 m) and is more than 36 feet (11 m) in diameter at its base, had not been impacted by the fire as of Friday, park officials said on Saturday. It stands about 2.5 miles (4 km) northeast of the Guardsmen.

Other steps the park service has taken to protect the sequoias include prescribed burns, which reduce the amount of available fuel in case the fire reaches them.

Sequoias depend on fire as part of their life cycle, but some massive, intense fires fueled by climate change may do more damage than in the past.

The KNP Complex, now considered a single fire after two blazes merged, has grown in size in recent days, burning some 21,777 acres (8813 hectares) as of early Sunday, according to the federal Inciweb fire information system. It remained 0% contained.

The blaze, one of dozens to erupt across several western states in a fire season that got off to an early start, forced the closure earlier this week of Sequoia National Park. — Reuters

De Lima hits back at Duterte for digging up old COA findings on DOJ, DILG