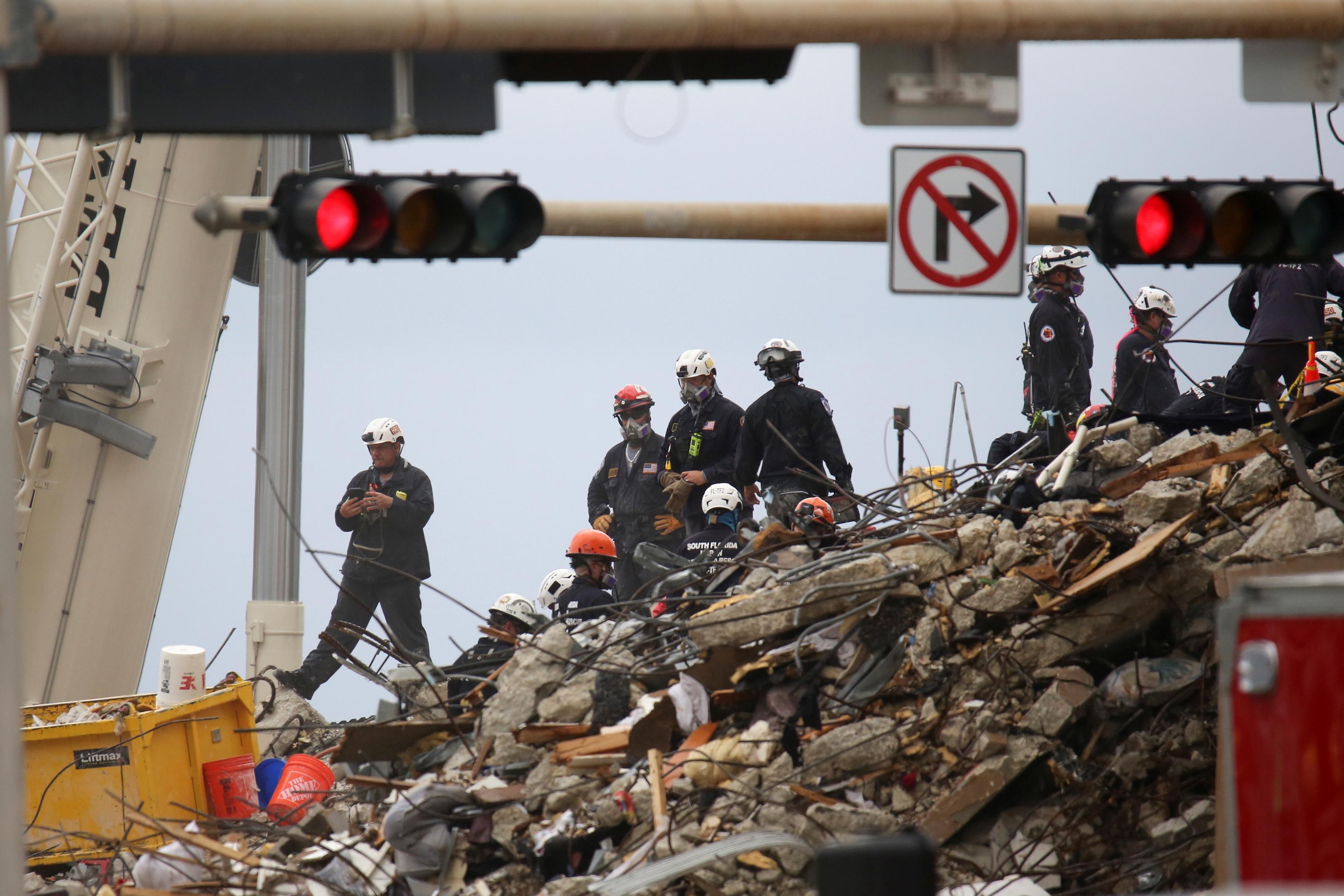 SURFSIDE, Florida – The death toll from last week’s condominium collapse in Florida rose on Friday to 20 after search-and-rescue crews found two more bodies, including the 7-year-old daughter of a Miami firefighter.

The grim, painstaking search for victims in the rubble, which was suspended for most of Thursday over safety concerns, proceeded on Friday with greater caution and a watchful eye on a hurricane that could strike Florida within days.

There were 128 people still missing and feared buried beneath tons of pulverized concrete, twisted metal and splintered lumber as the search stretched into its ninth day.

The number of people unaccounted for dropped by 17 from Thursday’s figure. Miami-Dade Mayor Daniella Levine Cava told a news briefing that the totals were fluid, in part because investigators sometimes learned of additional family members when determining whether missing residents were safe.

The young girl was the third child to be recovered from the collapse site in the oceanfront town of Surfside, next to Miami Beach.

Miami Mayor Francis Suarez confirmed to the Miami Herald that the firefighter, who was not identified, was at the recovery site at the time, though he was not one of the workers digging through the rubble.

The firefighter and his brother, also a firefighter, have kept a vigil at the site since last week, waiting until the girl was discovered, the paper reported.

About 200 officers saluted as her body was carried away, the Herald said, citing unnamed sources.

Officials said the discovery was especially emotional for many of the first responders who have mounted an unprecedented around-the-clock effort to search for survivors, even as the odds have grown longer with each passing day.

“Every victim we remove is very difficult,” said Miami-Dade County Fire Chief Alan Cominsky. “Last night was even more, when we were removing a fellow firefighter’s daughter. As firefighters, we do what we do – it’s kind of a calling. But it still takes a toll.”

No one has been pulled alive from the debris since the initial hours after the 12-floor Champlain Towers South condo partially caved in on itself early on June 24 as residents slept.

Authorities had halted the rescue and recovery effort early Thursday after they detected movement that raised concerns a section of the high-rise tower still standing might topple onto search crews in the debris field.

But the operation was restarted about 15 hours later when it was deemed safe, though with a new set of precautions in place, Cominsky told reporters Thursday evening.

Under the new search plan, teams would confine their work for now to just three of nine grids demarcated in the ruins, Cominsky said.

At some point, the remaining part of the building will be demolished, but Levine Cava said on Friday that it would “take some time” before that occurs.

Authorities were eager to make as much progress as possible before the expected arrival of Elsa, which strengthened into the first hurricane of the 2021 season on Friday as it threatened the Caribbean.

The storm could be near South Florida by Monday or Tuesday, National Weather Service meteorologist Robert Molleda told reporters, with tropical storm-force winds arriving as early as Sunday. But he warned that Elsa’s forecasted path remains uncertain.

The renewed search effort began shortly after a visit to the scene on Thursday by U.S. President Joe Biden, who spent about three hours consoling families of the dead and missing.

Investigators have not determined what caused the 40-year-old condo complex to crumble into a heap in one of the deadliest building collapses in U.S. history.

But a 2018 engineering report prepared by an engineering firm ahead of a building safety-recertification process found structural deficiencies in the condo complex that are now the focus of various inquiries, including a grand jury examination.

USA Today, citing a document the newspaper obtained from a family member of a missing victim, reported late on Thursday that a 2020 document from the same firm noted “curious results” after testing the depth of the concrete slab below the pool. But the document did not specify what that meant, the newspaper reported.

As recently as April, the condo association president warned residents in a letter that major concrete damage identified by the engineer around the base of the building had grown “significantly worse.”

Several lawsuits have already been filed on behalf of survivors and victims against the association’s board.

In a statement on Friday, the board – some of whose members remain missing – said it would appoint an “independent receiver … to oversee the legal and claims process.”

The board added that it would continue working with investigators to understand the cause of the tragedy. — Reuters

Monsoon trough to bring rains over NCR, rest of the country