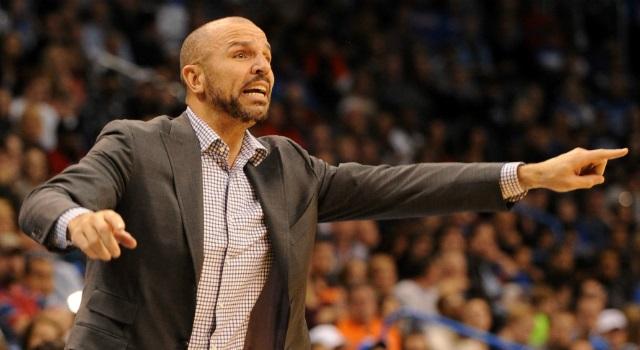 On the day he became the head coach of the Indiana Pacers, Rick Carlisle endorsed Jason Kidd as his replacement with the Dallas Mavericks.

Carlisle on Thursday was hired for a second stint as Pacers head coach after resigning in Dallas last week, one day after general manager Donnie Nelson was fired by owner Mark Cuban.

“It’s hard to put an exact finger on it,” Carlisle told ESPN about a Kidd-Mavericks pairing. “It’s just a feeling that I had that it would be mutually beneficial. My hope is that Jason Kidd will be the next coach of the Mavs because he and Luka (Doncic) have so many things in common as players.”

ESPN reported Thursday that Kidd has emerged as a front runner for the Mavericks’ head coaching position. Per the report, Kidd has the support of Mavericks legend-turned-advisor Dirk Nowitzki and others that have Cuban’s ear.

Kidd is an assistant coach under Frank Vogel with the Los Angeles Lakers. The 48-year-old Kidd was a 10-time All-Star and spent part of his career playing for the Mavericks, who selected him No. 2 overall in the 1994 draft. Kidd returned to play in Dallas from 2007-12. Carlisle began his run with the Mavericks in 2008.

Kidd also had playing stints with the Phoenix Suns, then-New Jersey Nets and New York Knicks, and later coached the Nets and Milwaukee Bucks. He has a record of 183-190 as a head coach.

The New York Times reported Thursday the Mavericks are currently focused on the general manager vacancy and have not focused on Kidd or any other coaching candidate.

Cuban said during the regular season he would retain Carlisle as rumors began to swirl of his imminent departure.

After an in-person meeting, Cuban and the Mavericks announced Carlisle’s resignation.

Central to building the roster is a new contract for Doncic, who is eligible to sign a maximum extension this offseason valued at over $200 million.

Other critical components for a new GM to decide include whether to re-sign unrestricted free agent Tim Hardaway Jr.

The future of Kristaps Porzingis in Dallas isn’t clear. Porzingis was an All-Star with the New York Knicks but has taken a back seat to Doncic in Dallas. Nelson said before the Mavericks were eliminated from the playoffs by the Los Angeles Clippers that a Doncic-Porzingis rift was “way overblown.”