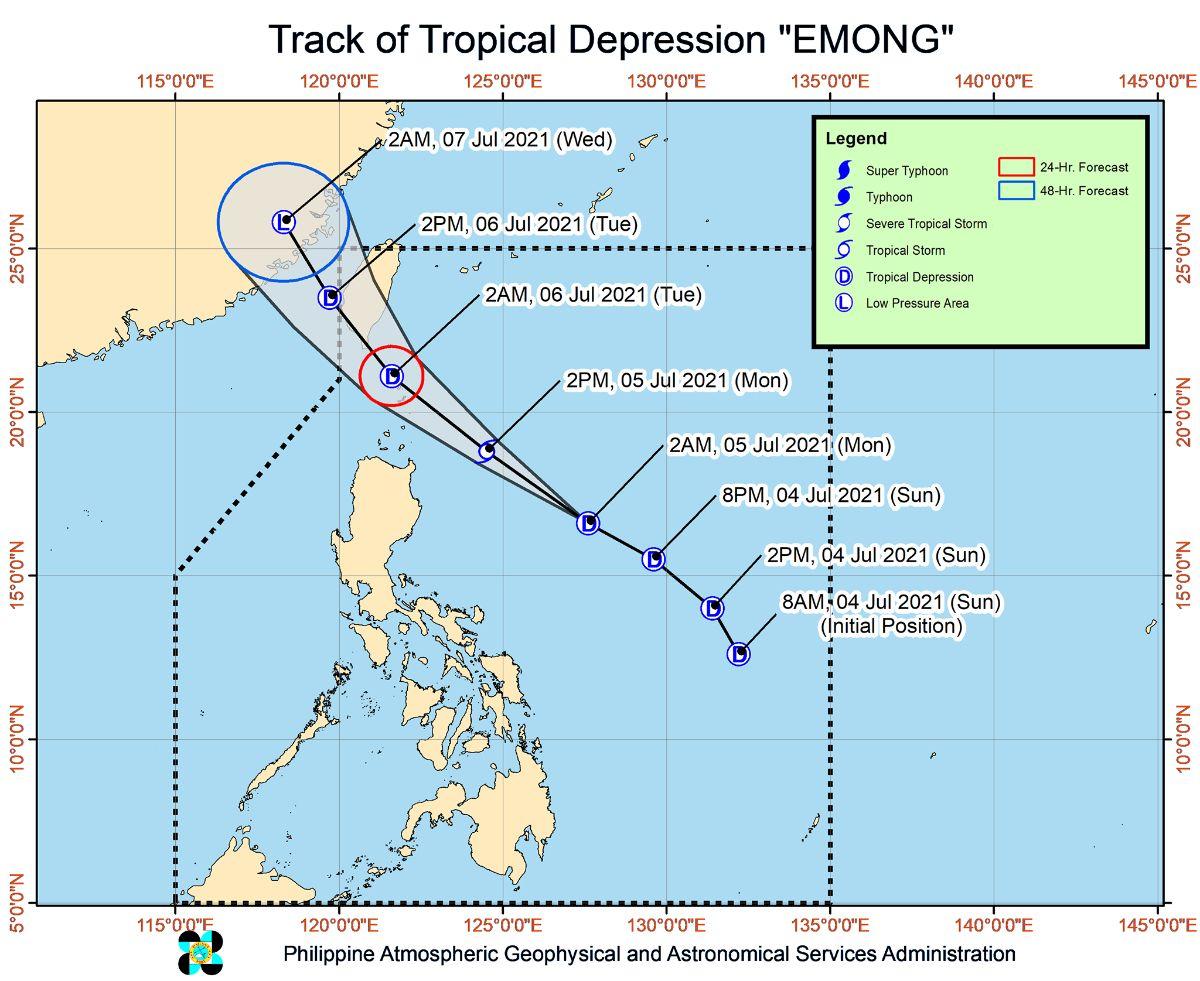 In its 8 a.m. bulletin, PAGASA said there is an increasing chance that the close approach or landfall will happen at a much earlier time.

“On the forecast track, the center of the tropical depression will pass close or make landfall in the vicinity of the Batanes-Babuyan Islands area this afternoon or tonight,” it said.

PAGASA said Emong may intensify into a tropical storm in the next 12 hours “although intensification is being deterred by its high movement speed.”

Based on the projected track and intensity of Emong, PAGASA said there is possibility that TCWS No. 2 will be raised over areas under TCWS No.1.

Moderate to heavy with at times intense rains may prevail over Batanes and Babuyan Islands, PAGASA said as it warned that isolated to scattered flash flooding and rain-induced landslides are highly likely in areas prone to these hazards.

Adjacent or nearby places may also encounter flooding in the absence of such rainfall due to surface runoff or swelling of river channels, PAGASA said.

Areas under TCWS No. 1 are expected to experience strong winds (strong breeze to near gale) during the passage of Emong.

Due to Emong, rough to very rough seas of up to 5.5 m meters are expected over the seaboards of areas under TCWS No. 1 and the remaining seaboard of Cagayan.

“Sea travel is risky over these waters, especially for those using small seacrafts. Mariners without the proper experience should immediately seek safe harbor,” PAGASA said.

At 7 a.m., Emong was located at 385 kilometers east northeast of Tuguegarao City, Cagayan, or 385 km east of Aparri, Cagayan, with maximum sustained winds of 55 km and gustiness of up to 70 km/h.

Based on the forecast, Emong will continue moving generally northwestward until Monday night as it approaches the Extreme Northern Luzon-Taiwan area.

After passing in the vicinity of Extreme Northern Luzon as a tropical storm, PAGASA said Emong may downgrade into a tropical depression due to its interaction with the rugged terrain of southern Taiwan.