Duterte satisfaction rating dips in May, June 2021 after hitting record-high in 2020 —SWS

President Rodrigo Duterte’s satisfaction rating was the highest in November 2020 with 84% but it went down to 75% in May 2021 and June 2021, Social Weather Stations (SWS) said on Thursday.

In its recent presentation, SWS results indicated that amid the COVID-19 crisis, Duterte’s satisfaction rating scored 84% with 51% very satisfied and 33% somewhat satisfied in November 2020.

However, both in May and June, his ratings decreased to 75% with 41% somewhat satisfied and 34% very satisfied.

The lowest rating on Duterte’s performance, however, was in June 2018 with 66% satisfaction rating (32% very satisfied and 34% somewhat satisfied). 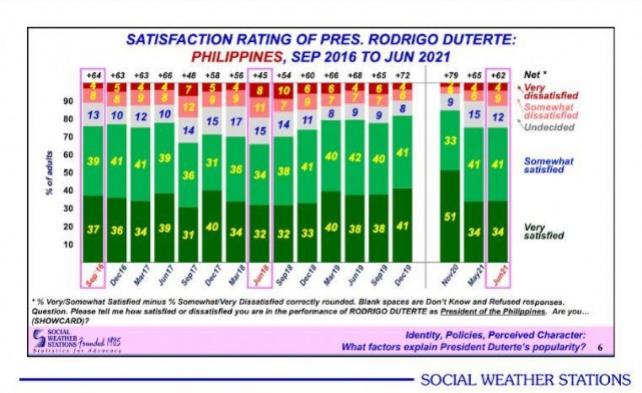 SWS also said there is “no single explanation” as to why Duterte received high satisfaction ratings.

It noted that Duterte’s strong base support may have affected the ratings.

“One is his strong base support, which has stuck with him so far, regardless of economic and other developments, and best exemplified by Mindanao residents,” the pollster said.

Duterte’s policy issues such as drug war and helping the poor may have also  affected the satisfaction and dissatisfaction ratings.

Duterte’s character such as his “perceived decisiveness and diligence” may have also attracted those who responded in the satisfaction survey.

“Those who see these character traits in him tend to be satisfied with him,” SWS said.—LDF, GMA News

Marcos says South China Sea ‘keeps him up at night’

Marcos says South China Sea ‘keeps him up at night’

Our Bisita sa Barangay recipient for this sunny afternoon is Brgy....