Comelec: All systems go for start of election season 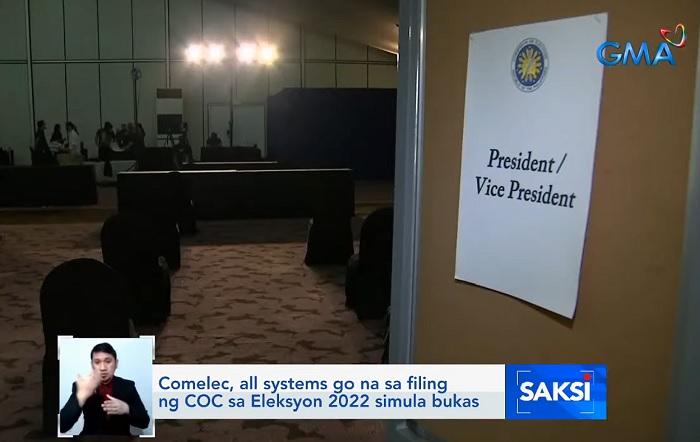 It’s “all systems go” for the Commission on Elections (Comelec) with the filing of Certificates of Candidacy (CoC) for the national and local elections on May 2022 amid the implementation of health protocols amid the COVID-19 pandemic, GMA News’ Tina Panganiban-Perez on “Saksi.”

The inspection included the parking lot, area designated for the rapid antigen test, the area set up for the filing of COCs, the entry and exit of aspirants.

The expected aspirants will be filing CoCs for the position of President, Vice President, Senator, and Party-list representatives at the Harbor Tent Garden of the said hotel.

Panganiban-Perez reported that strict security measures are in place for the next seven days.

Also on standby within the compound are firetrucks, armored vehicle of the PNP Special Armed Forces, and ambulance.

There will about 3,000 PNP personnel, soldiers, members of the Philippine Coast Guard, and Bureau of Fire Protection who will be deployed to secure the area.

No fly and no fishing zone has been declared within one kilometer radius of the area starting midnight of Sept. 30 until the end of the time for CoC filing on Oct. 8, 2021.

“So far, we are ready naman, in case, of any eventuality that may happen.”

The Metro Manila Development Authority (MMDA) will assist in making sure there would be a steady flow of traffic in the area.

Aspirants are allowed a limited number of supporters into the venue due to the ongoing pandemic.

All Comelec employees on duty have been fully vaccinated.

All those entering the venue must present a negative COVID test result.

“So we already coordinated that with our partner agencies, like the MMDA and PNP na siguraduhin walang magkukumpol-kumpol na mga tao sa labas.”

Comelec offices in the provinces are ready to accept the CoC of aspirants in their areas.

Abas said the regional offices were already given pointers on how to implement health protocols during the filing of CoCs.

Voter registration, meanwhile, although extended by the poll body will be temporarily suspended to give way to the filing of CoCs.