Biden visits Congress to rally votes for his agenda, vows to ‘get it done’ 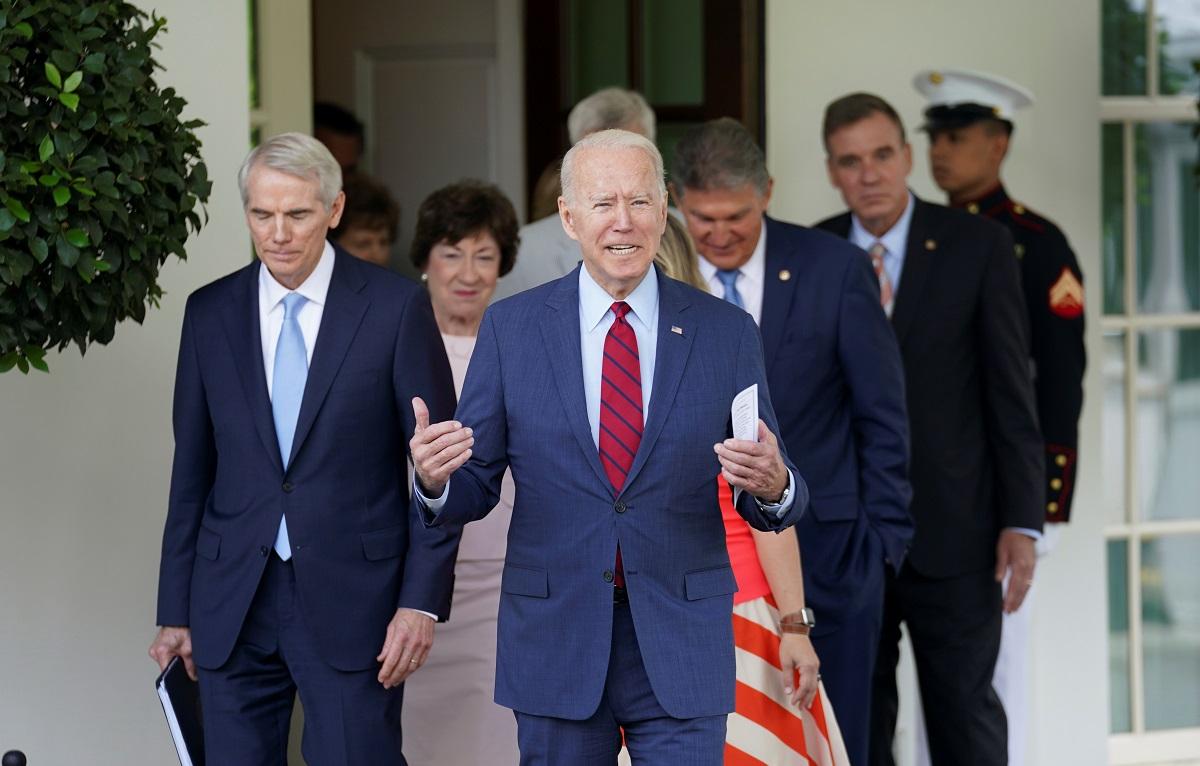 WASHINGTON – President Joe Biden on Friday urged his fellow Democrats in Congress to overcome divisions that threaten his agenda and pass legislation to bolster safety-net programs, fight climate change and rebuild the nation’s roads and bridges.

Biden’s visit to the Capitol capped a tumultuous week that saw lawmakers narrowly avert a government shutdown and postpone a House of Representatives vote on a $1 trillion infrastructure bill already passed by the Senate.

Fresh disagreements emerged among Democrats over the size of a multi-trillion-dollar companion bill that would fund health, education and climate measures.

The president acknowledged in a closed-door meeting that Democrats currently did not have enough votes to pass the two massive spending bills that have divided moderates and progressives, lawmakers said.

“It doesn’t matter whether it’s in six minutes, six days or in six weeks. We’re going to get it done,” Biden told reporters after the meeting.

Members of the party’s progressive wing vow to block the $1 trillion infrastructure bill until they can be sure that moderates will not derail the bigger social spending and climate change bill. Moderates say that bill is too expensive.

“I think the president might be the only person that can bridge both the trust gap and the timing gap,” Representative Dean Phillips said before the meeting.

Lawmakers said Biden told them the social-spending bill should cost about $2 trillion — a significant drop from his initial $3.5 trillion proposal, and closer to the $1.5 trillion that key moderate Senator Joe Manchin said he would support.

Democratic leaders in the House did not appear to have a clear plan to resolve the impasse earlier.

“We are working on trying to get to a place where everybody is comfortable,” No. 2 House Democrat Steny Hoyer told reporters before Biden’s visit.

With a narrow majority in the House, Biden’s party cannot afford to lose too many votes on the infrastructure legislation, which would double spending on roads and other infrastructure. The bill has already passed the Senate with bipartisan support.

Democrats said they also planned a vote to ensure that transportation funding, which expired on Thursday, is not disrupted while they continue to negotiate.

Progressives are angry that two Senate moderates – Manchin and Kyrsten Sinema – oppose the size of Biden’s plan to boost social spending and fight climate change. The Senate is split 50-50 with Republicans, all of whom oppose the multi-trillion-dollar bill, so every Democratic vote is needed for passage with Vice President Kamala Harris the tie breaker.

Sinema has met with Biden multiple times to discuss the bill. She was home in Arizona on Friday but remained in touch with the White House, a spokesman said.

House Republicans are unlikely to help pass the infrastructure bill, eager to deny Biden a policy victory ahead of the 2022 midterm elections, when history favors their chances to recapture majorities.

Congress has little time to focus on the infrastructure fight due to another fast-approaching deadline: the debt ceiling.

A historic US debt default could occur around Oct. 18, Treasury Secretary Janet Yellen has estimated, if Congress fails to give the government additional borrowing authority beyond the current statutory limit of $28.4 trillion.

Republicans want no part of the debt limit increase, saying it is Democrats’ problem since they control Congress and the White House. Democrats note that about $5 trillion of the nation’s debt is the result of tax cuts and spending passed during Republican Donald Trump’s presidency.

The House approved a bill late on Wednesday suspending the debt limit through December 2022. The Senate could vote on it “as early as next week,” Senate Majority Leader Chuck Schumer said, but Republicans are expected to block it again as they have twice before.  — Reuters