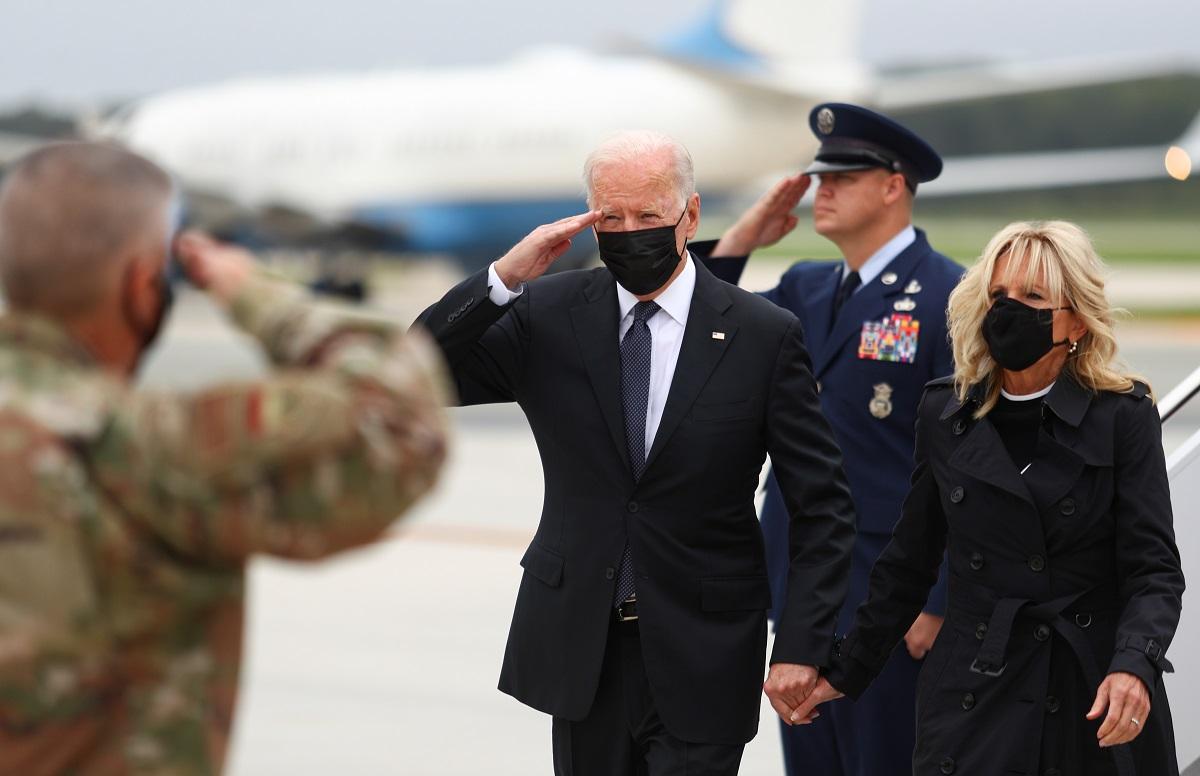 DOVER AIR FORCE BASE, Delaware — US President Joe Biden arrived at Dover Air Force Base on Sunday to honor members of the US military killed in a suicide bomb attack during the evacuation of civilians from Afghanistan last week.

An Islamic State suicide bombing on Thursday killed scores of Afghans and 13 American troops who were guarding Kabul’s airport amid an airlift that has evacuated about 114,400 people in the past two weeks.

“We are in a period of serious danger given what we are seeing in the intelligence,” Biden’s national security advisor, Jake Sullivan, told CNN’s “State of the Union” program in an interview broadcast on Sunday, before the latest strike was reported.

“We are taking every possible measure at the direction of the president to ensure that our forces are protected on the ground even as they complete their mission of bringing in the remaining American citizens and Afghan allies.”

Biden, a Democrat, faced criticism from Republican lawmakers, who accused his administration of bungling the withdrawal of US forces from Afghanistan.

After arriving at the base in Delaware, Biden and his wife, Jill, met with the families of service members killed in the attack.

They then witnessed the transfer of the troops’ remains from an aircraft that landed at the base.

.@POTUS, @FLOTUS and Secretary of Defense Lloyd Austin look on during the Dignified transfer at Dover Air Force Base, Delaware, as one the 13 members of the military that were killed during the terrorist attacks in Afghanistan. pic.twitter.com/YfsCNUdsSO

Thursday’s attack, which was claimed by ISIS-K, the Afghan affiliate of Islamic State, was the most lethal incident for US service members in Afghanistan in a decade.

The bombing took place just outside the gates of the airport, where thousands of people have gathered to try to get a flight out the South Asian nation since the Taliban returned to power on Aug. 15.

The Taliban’s rapid advance across Afghanistan amid the withdrawal of American and allied troops combined with the chaotic scenes at the airport have presented Biden with his biggest foreign policy challenge as president.

Biden has vowed to punish those responsible for the airport bombing. The US military said on Saturday that it had killed two ISIS-K militants in a drone attack in Afghanistan.

Sullivan said the two “are individuals involved in the facilitation and planning and production of explosive devices and they are part of the larger network of ISIS-K.”

The United States has evacuated nearly 5,500 American citizens from Afghanistan since Aug. 14, including 50 in the last day, and was still working to get about 250 American citizens still in the country onto evacuation flights, a State Department spokesman said.

The Taliban had pledged to allow Afghans to leave Afghanistan after Tuesday’s deadline for the withdrawal of NATO troops, after which the United States was unlikely to have any diplomats in the country to help at-risk Afghans who miss out on the evacuation flights, Secretary of State Antony Blinken said in an interview on NBC’s “Meet the Press” program.

“In terms of having an on-the-ground diplomatic presence on September 1st, that’s not likely to happen,” Blinken said.

Senator Ben Sasse, a Republican member of the Senate Intelligence Committee, said the administration had failed to plan for a Taliban takeover, and criticized Blinken for giving an overly positive view of the evacuation effort.

“Their plan has basically been happy talk. People have died and people are going to die because President Biden decided to rely on happy talk instead of reality,” Sasse told ABC’s “This Week.”

Other members of Congress have vowed to probe what went awry in Afghanistan. Senate Foreign Relations Committee Chairman Bob Menendez, a Democrat, said earlier this month his panel will hold a hearing on US policy toward Afghanistan “including the Trump administration’s flawed negotiations with [the] Taliban, and the Biden administration’s flawed execution of the US withdrawal.” — Reuters

Cloudy skies with rains over northern, central Luzon due to northeast monsoon