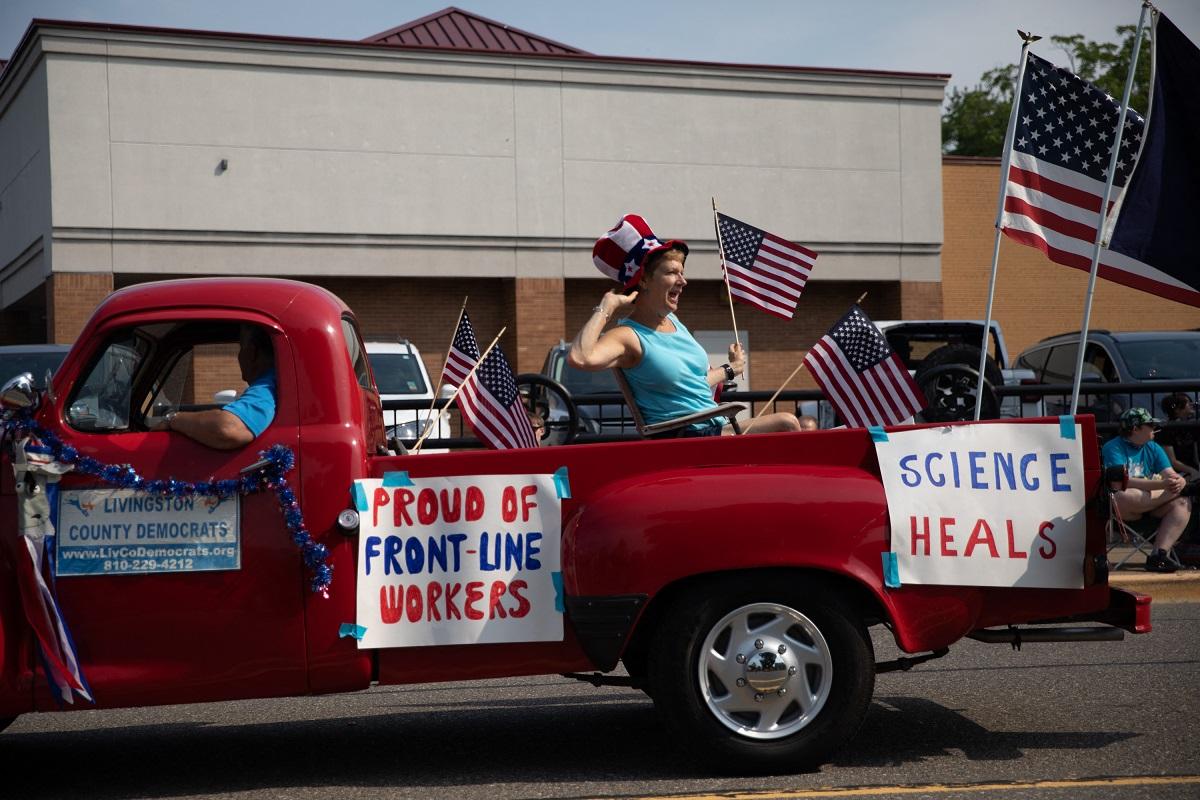 NEW YORK — Americans marked their nation’s 245th birthday on Sunday with fireworks that may look brighter, hotdogs that may taste juicier and marching bands that may sound jauntier after the coronavirus pandemic forced the cancellation of nearly all celebrations last year.

As always, fireworks displays are the highlight of the July Fourth holiday. Two of the biggest pyrotechnic shows in the country will blast off over the National Mall in Washington, and over a mile stretch of New York City’s East River, separating Manhattan from the boroughs of Queens and Brooklyn.

Despite being scaled back by COVID-19, Nathan’s Famous Hot Dog Eating Contest in Brooklyn’s Coney Island once again thrilled socially distanced crowds when reigning champion Joey Chestnut shattered his own world record by downing 76 hot dogs and buns in 10 minutes. That was one more than he gobbled last year and marked his 14th win.

JOEY CHESTNUT WITH A NEW WORLD RECORD 76 HOTDOGS IN 10 MINUTES ????

This year’s July Fourth holiday, in the wake of 600,000 Americans deaths from COVID-19 and amid a rise in the more aggressive Delta variant, was a time for Americans to show their patriotism and to celebrate a fresh, personal sense of freedom by mingling with friends once again and enjoying summer’s simple pleasures.

But this year’s July Fourth was not entirely carefree. The US Department of Homeland Security warned state and local police last week of a heightened threat of violence by domestic extremist groups amid relaxed COVID-19 restrictions and the July Fourth holiday.

It was expected to be the busiest July Fourth road travel holiday on record— with an estimated 43.6 million Americans behind the wheel, or 5% more than a previous record set in 2019, the American Automobile Association said.

Aleksandra Magidoff, a 12-year-old from Brooklyn, traveled to a New Jersey suburb to reconnect with a lifelong friend and her family. They were among the more than 3.5 million people who have moved out of New York, once the US epicenter of COVID-19, since the pandemic started in the spring of 2020.

“I’m so excited—I can talk to them and celebrate with them and just socialize!” said Magidoff, who was fully vaccinated under the enormous blue whale model at the American Museum of Natural History in New York. The girls planned to gorge on “a bunch of hamburgers and hotdogs” before taking in the fireworks show at a New Jersey fairgrounds, she said.

Last July Fourth she watched fireworks from her apartment building’s rooftop while under pandemic lockdown, allowed to celebrate with only her immediate family.

In Washington, masks must be worn by any unvaccinated people who are among the 1,000 people attending President Joe Biden’s July Fourth celebration on the White House lawn with essential workers and military families, officials said.

Today, Americans are #BackTogether – celebrating our country’s July 4th Independence Day and the progress we have made against the virus together.

The president hosts the event three days after his visit to Surfside, Florida, to console families whose loved ones were in a condo tower that collapsed on June 24. Several Florida communities have canceled their July Fourth fireworks out of respect for those impacted by the tragedy, city officials said.

Elsewhere in Washington, marching bands stepped off on Sunday in a traditional parade on Capitol Hill’s Barracks Row. As darkness falls, the National Mall was expected to draw big crowds to a 17-minute fireworks display set off from both sides of the Lincoln Memorial Reflecting Pool.

On New York’s East River, 50 pyrotechnicians have spent days loading more than 65,000 shells on five barges to wow audiences watching the spectacular show either in person or on television. The display is presented by Macy’s department store.

Lighting up the night’s sky not only delights crowds but also promises to restore a lifeline this year for the businesses that supply the 16,000 July Fourth fireworks displays that typically occur in cities and towns. Last year, only a “scant few” went on with the show, said Julie Heckman, executive director of the American Pyrotechnics Association.

“Approximately 70% are scheduled to return, and many will be bigger and better than pre-pandemic levels,” Heckman said.

But for some July Fourth was somber.

In addition to the pall cast over the country by the pandemic and the Florida building collapse, the US West faces a heightened risk of wildfires after a scorching heatwave and extremely dry conditions. And nationwide supply chain glitches tied to the pandemic have jacked up prices of everything from household items to fireworks. — Reuters